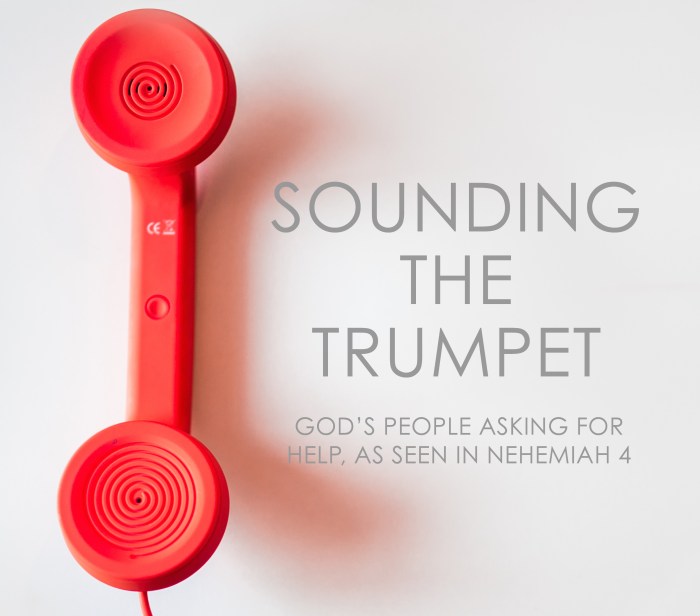 The Old testament book of Nehemiah opens up to us like the scene of a movie.

The city walls of Jerusalem were standing in ruin from war, leaving the people defenseless and vulnerable. Nehemiah, a cupbearer of the King, had received word about the state of his beloved city and began to weep and mourn over their situation. He prayed to the Lord, confessing the sins of Israel and the sins of his father’s house, and went before the King. The King saw how distraught Nehemiah was over the situation, listened to his pleas, and allowed Nehemiah to return to Jerusalem to begin rebuilding the city walls.

As Nehemiah began to gather men and resources to rebuild, a Samarian leader named Sanballat heard the news and was greatly angered, for he did not want the exiles to return and take control of the land. It is in the early chapters of Nehemiah we see opposition to God’s work begin and the tactics of the enemy unfold.

IT SEEMED TOO MUCH

In the city of Judah it was said that the “strength of those who [bore] the burdens was failing,” there was too much rubble, too much oppression, too much work, too much to do.

This is one of the great struggles unfolding in our churches today. The strength of those who bear the burdens is failing. We have many burden-bearers within our churches and the assault of the enemy will often leave them weakened. Christians in this condition tend to see only the rubble in front of them. They are completely overwhelmed. The tasks set before them seem too much and, like Nehemiah’s workers, they believe there is no way to do what God has called them to do.

Just as he did in the day of Nehemiah, the enemy views this as great opportunity to attack. When we leave our churches on Sunday, we are doing great, but by the time Wednesday comes around, what happens? We’re exhausted. We’ve been assaulted, intimidated, and worn down by the enemy of our souls. We’re too tired to even pray. “There is too much rubble in front of us.”

A BATTLE PLAN AGAINST THE ENEMY’S GREATEST TOOL

Nehemiah devised a plan of defense that would unite and protect his people. The workers were spread out along the wall. Half of the men worked while the other half stood guard. Each of the builders worked with one hand and held their weapon with the other, with their sword by their side.

They were prepared and ready for the attack from the enemy. Are we? Are we prepared to fight the lies of the enemy with the Sword of the Spirit: the truth of God’s word?

If Sanballat or one of his men had taken someone out while they were building the wall, it would have opened up a weak spot and the work would have stopped. This would’ve affected the task God had called them to complete. When you are under attack it doesn’t just affect you, it hinders the work of the entire church.

This is why isolation can be such a powerful tool of the enemy. We have an enemy that hates us and more than that, he hates the Christ in us. He will stop at nothing to destroy our faith, and if he can isolate someone apart from the body of Christ, not only will that hinder the individual but hurt the church as a whole. If the enemy could isolate the builders of the wall, they could destroy the work they were accomplishing one person at a time. This is no different from the church today.

Isolation is what happens whenever doubt and discouragement have its work in you apart from the truth of the Gospel and the help of the body of Christ. Accusations begin to wear us down and we begin entertaining thoughts of “What if?” and ultimately “Why bother?”

The enemy’s ultimate goal is the destruction of your faith. As in the days of Nehemiah, he wants you to abandon the work that the Lord has called you to. He understands the importance of the body, and if he can isolate you from the church, something dangerous will happen.

For the rest of this article and for more content like this, check out the free RTM Magazine on iPhone, iPad, Android, or on the web.